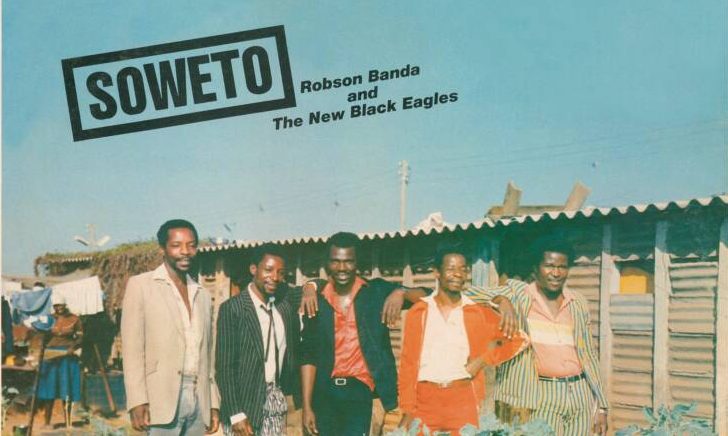 France’s Nyami Nyami Records recently announce the reissue of the classic Zimbabwean album SOWETO by Robson Banda and the New Black Eagles, with the same tracklist and original artwork, produced at the peak of jit’s popularity in the mid-1980s.

Banda’s roots were foreign, but his music was quintessentially Zimbabwean, as these lively mid-eighties recordings demonstrate; he had previously played with Mapfumo’s short-lived Acid Band and Jonah Moyo’s Devera Ngwena Jazz Band before forming the New Black Eagles.

Born in Petauke, eastern Zambia, in 1955, Robson Banda was an aspiring freedom fighter, but failed to cross into Mozambique and join the Liberation War. He ended up in Kadoma, where he joined the Savanna Sisters as a drummer. There, he met Sipho Skosana, who taught the 17-year-old how to play the guitar and linked him up with Mapfumo. After a short Acid Band stint, Banda headed for Mashava, where Jonah Moyo was assembling a group to entertain the mine community.

While staying within the Chimurenga music framework pioneered by Thomas Mapfumo and Jonah Sithole, Robson Banda and the New Black Eagles produced a crisp, precise and exciting sound, emphasising the upbeat dance music favoured on the dance-floors of independent Zimbabwe’s nightspots and beerhall.

Banda joined the band playing bass guitar and was hired as a storekeeper by the mine. After recording Devera Ngwena Zhimozhi as an original member, the adventurous Banda refused to waste away behind a shop counter and left town to form his own group, the Black Eagles. This new band encountered various problems, with band members eventually abandoning Banda and his younger brother, Biggie.

Banda turned to his old acquaintances from Savanna, recruiting Daniel Zande and John Phiri (sometimes credited as Chivere). Also invited was Kadoma guitarist Job Mteswa, and the group became known as the New Black Eagles, based in Chegutu. They released the singles Tambazvako, Dzapasi, and the group’s most successful recording of the time, Hauzomboda. They recorded the albums Sidhudla, the group’s debut, and the chart-topping Dzinomwa MunaSave, before crafting this masterpiece, SOWETO.

Title track Soweto is a hauntingly uplifting declaration of solidarity. The melodious, guitar-heavy track entreats God to help people struggling in apartheid South Africa; this legendary anthem in the Zimbabwean catalogue was symbolic of the prevailing Pan-African sentiment.

The New Black Eagles achieved great success from their base at the Chegutu Hotel and toured the country, including various venues, festivals and Independence Day celebrations in Harare. In 1989, promoter Bob Diener released Zimbabwean albums in the United States; he selected music from just four artists: Thomas Mapfumo, James Chimombe, Jonah Sithole, and Robson Banda. The New Black Eagles were also a favourite of legendary BBC Radio DJ John Peel, who regularly played their music in the eighties. Such was their popularity that they supported London reggae titans Misty In Roots on their 1990 tour.

In SOWETO, Robson Banda and the New Black Eagles injected a vibrant musical sensibility into the cultural landscape of their homeland, delivering a dance-infused sound that blends the up-tempo rhythms of jit and the more intimate cadence of chimurenga.

After the release of SOWETO, the band’s makeup changed, with Mteswa leaving to join Oliver Mtukudzi. The group went on to release the albums Ngoma Ngairire, Mukuwasha, Sango Rinopa Waneta, Gehena, and Regai Nditendeuke. Of the original musicians on this recording, Job Mteswa passed away in 1996 (he is memorialised on Mtukudzi’s Akoromoka Awa), Daniel Zande and Robson Banda followed in 1998, with Biggie Banda passing on in 2000. John Phiri’s fate is unknown; a 2003 report had him playing backup for Mapfumo copycat Robbie Chagumuka, and still living in Chegutu.

Nyami Nyami Records is a French label launched by Charles Houdart and Antoine Rajon. Named after the folkloric river god of the Zambezi that runs along the border between Zambia and Zimbabwe, the label promotes music mainly from Southern Africa.

From Zambia to Zimbabwe, Mozambique to South Africa and everywhere, the mission at Nyami Nyami Records is to dig through the archives for hidden classics to reissue, whilst keeping their ears firmly to the ground for new sounds, rare projects and collaborations.