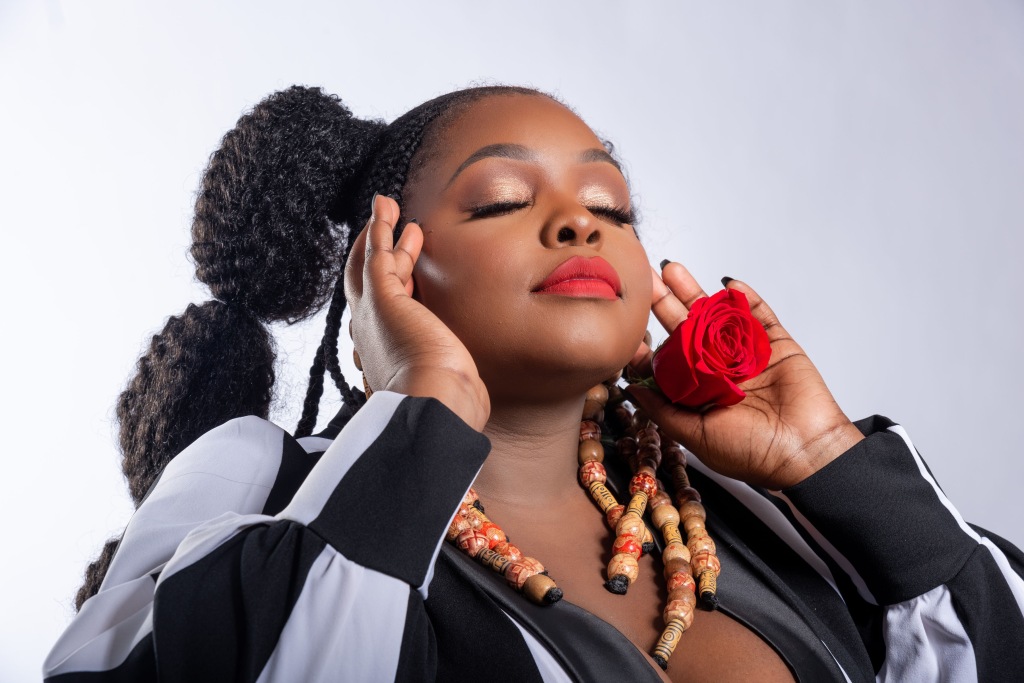 Some plants go though their cycle in a few weeks – others take many years. A long-blooming perennial can best describe Sharonrose Manhiri, her music and the bright future that lies ahead of her solo career.

By earGROUND with excerpts from Sharonrose Music

Following years of being a background singer, doing cover songs at weddings and corporate functions, Sharonrose believes her new single will launch her solo career.

The UK based Afrosoul singer,  Sharonrose Manhiri is set to release her debut single Khumbul’ekhaya on December 1.

The single, from her EP Strings and Roses is set to establish Sharonrose as a solo act following years of working with several seasoned artists both at home and in the UK.

Khumbul’ekhaya is a feel good Afrosoul jam about a love sick person who longs to come back home to their lover.

The blending of Afro fusion from Bulawayo based ensemble,  The Outfit Band, staccato guitar by Sam Siwela and Sharonrose’s soothing vocals makes the song a perfect harmony for Christmas holidays.

The perfect blend of African sounds connects Sharonrose to her roots and the forthcoming single aptly captures that connection to her country of birth.

“Through this song my fans will get to know a bit about me, what makes me happy, where I’m from and how my identity makes me feel. Khumbul’ekhaya is a feel good song, it’s smooth and soothing,” she said.

Due to the COVID-19 pandemic, Sharonrose could not fulfill her dream of shooting her debut video in her village in Honde Valley.

To get that Zimbabwean feel in upcoming video,  she collaborated with a Bulawayo based videographer to fuse some Zimbabwean scenes.

“In a perfect world I would have travelled to Zimbabwe to work on the production of the song and to shoot the video. I had dreams of shooting the video in Honde Valley, kumusha kwangu. However, when the pandemic really hit I realised this would not be possible,” she said.

“When I wrote this song my vision of the video was in Zimbabwe and I didn’t want to give up on this so half the video was shot in Bulawayo and the other half in England.”

“While I have been in the music industry for many years as a backing vocalist, I consider Khumbul’ekhaya to be my Genesis, my introduction to the world. My goal is to spread love, positivity and inspiration through my music and these are the three words I would use to describe this song,” she said.

” While I have spent a lot of my life abroad I have a very strong connection to where I am from and this song is an expression of that. Through this song the fans will get to know a bit about me, what makes me happy, where I’m from and how my identity makes me feel.

“The guitarist and songwriter earlier this year delivered an amazing performance at the UK Chabvondoka concert alongside seasoned artists like Edith WeUtonga, Ivy Kombo and many other talented performers..”

Sharonrose is set to release her debut EP next year titled Strings and Roses.

I am working on an EP dubbed Strings and Roses that will  be released in 2021 but I will release some singles first. I am looking forward to collaborating with a number of artists as I believe collaborations lead to musical magic and this is evident through the great collaborations we have seen coming out of Zimbabwe in 2020 alone,”

Sharonrose believes that after such a turbulent year we could all use something smooth, soothing and ultimately relatable.