David Mankaba, a guitarist whose pop group the Bhundu Boys helped popularize African music in Europe and the United States, died on 27th June in 1991 of tuberculosis complicated by AIDS, relatives said. He was 32 years old and lived in Harare, the Zimbabwean capital.

Plot Mhako, Earground with excerpts from NY Times, The Guardian

It was the first time AIDS had been listed as the official reason for the death of a prominent figure in Zimbabwe. Friends said that Mankaba had asked that his illness be publicised to help in an AIDS awareness campaign. A number of songs were made in his tribute and this also marked the beginning of a series of HIV awareness songs and films as creatives responded to the scourge at a time the subject was still a taboo.

Mankaba should forever be remembered and celebrated for making a bold stand which helped change the nation’s perception, attitude and behaviour toward HIV.

Auxillia Chimusoro was the first Zimbabwean woman to publicly announce being HIV-positive in 1989.

In one conversation, internationally sought after Zimbabwean artist and producer Humpfrey Domboka known as Mboks spoke about how HIV/AIDS almost wiped out an entire generation of Zimbabwean musicians,  “….a lot of people ask what happened to all that Zimbabwean talent we had… AIDS almost took out a whole generation of musicians and actors while few were paying attention leaving us with no succession plan. It’s so sad. That’s why sometimes the Zimbabwean sound lacks originality.”

Named after Zimbabwe’s freedom fighters, The Bhundu Boys burst onto the world music scene in 1987 with the release in the UK of the album Tsvimbodzemoto on the Disc Afrique label. Their pioneering music was a style called Jit, which is a fusion of Chimurenga, Rock, Disco, Country and Pop.

Original band members included Rise Kagona on lead-guitar , Biggie Tembo on vocals and guitar, on the bass David Mankaba, Shakespear Kangwena on keyboard and on the drums Kenny Chitsvatsva. Other members like Kuda Matimba and Shephard Munyama later joined the band.

The Bhundu Boys lived in UK for years after being signed by Warner Music. The band played in North America, Australia and Hong Kong

The Bhundu Boys made several successful tours of Europe and the United States and were especially popular in Britain. #NEWYORKTIMES,

They toured the UK relentlessly, signed to Warner Bros and, in 1987, even supported Madonna at Wembley. Tragically, it all fell apart. The new material was badly received, and over the course of a decade, there were sackings, management wrangles, three Aids-related deaths and a suicide. #TheGUARDIAN

Bhundu Boys, one of Africa’s biggest international musical export crumbled in the 90s with some members believing it was the work of bad luck, disagreements (over leadership and especially the purchase of a house in London from the £80,000 record deal advance from Warner)  bad management and ultimately bandmates succumbing to Aids, mental illness and suicide. 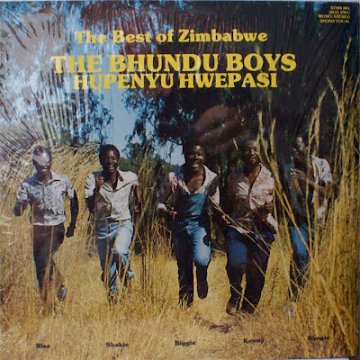 Shepherd Munyama passed in 1992 and Shakespear Kangwena followed in 1993, Biggie Tembo in 1995.

Still today, the name Bhundu Boys brings so many fond memories of a short lived music legends. A number of artists have attempted to resuscitate the sound with not much success. Rise Kagona a founding member still lives in Edinburg and still performs, Kuda Matimba lives in London and plays with a group he started in 2005 together with fellow former Bhundu Boys member Kenny Chitsvatsva.

The legacy of Bhundu Boys lives on with bands like Mokoomba following their footsteps of international success.

Their music still resonate with a lot that is happening in our lives and our country today. Kutambura recorded in 1989 by Warner Music UK speaks deeply to the prevailing social, economic and political struggles in Zimbabwe.