Nasty C joining Def Jam, will he avoid the American curse and become a star?

Congratulations flew in from across Africa for the South African superstar rapper as he signed with Def Jam Records a couple months back.  Prior to this, the chart-topping rapper had made international waves in the past year appearing on some of the most popular American urban radio talk shows. His free style on Sway in the Morning garnered millions of views on YouTube and sent tongues wagging as pundits and a lot of fans like me, predicted that one of the record companies would snatch him to their stables fast. Whether the delayed signing was by choice or a result of long negotiations, it has finally happened and the Send Me Away hit maker has finally dived into the deep end of the music pool.

With this signing, he joins a star-studded list of African stars that have made the trans-Atlantic move lately from Davido to Mr. Eazi, Tiwa Savage, Burna boy and Dbanj who did so earlier last decade.

So far, the move from Africa to America has proven to be an uphill climb for most of these acts as emulating similar stardom has eluded them. Nasty C is brave and ambitious to tackle it. With the dust settling on his signing, it’s time to measure his prospects. To try and forecast how this journey might go for him I’ll try to use recent history of African stars and breaking into America as a measure. 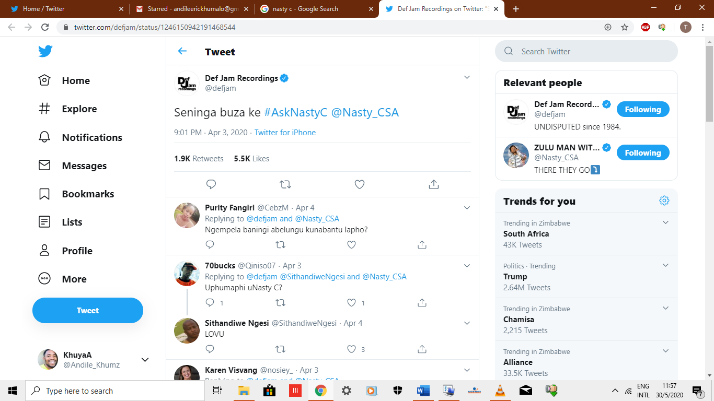 Burna Boy arguably the biggest star on the continent right now, threw in his hook into the world’s biggest music market recently. Since then, he has played Coachella festival a feat so highly coveted among musicians worldwide. A recent season of the Dwayne Johnson starring HBO show also featured his track ‘Anybody’, no doubt garnering more exposure for him, the afro fusion star has appeared on the popular daily show with Trevor Noah. The sugar coating was a Grammy nod for best world music album for his hit album African giant. For the avoidance of any doubt Burna Boy’s move to the US has been nothing but successful attempt, by the looks of things he’s bound to continue on this trajectory, if he was a star in Africa when he left, he is on his way to be a giant now. Nasty C will be hoping to emulate similar or even greater success.

Dbanj the Nigerian superstar made splash headlines with his signing to Kanye West’s Good Music early last decade. The Nigerian then heralded his arrival into the world music with the smash hit Oliver Twist. Mr. West himself made a cameo in video that would become a UK top single. Pundits and fans alike hailed him to be the next success but that success was just that. This Naija star would not crack the American market leading him to abandon his contract.  Unfortunately, that was not the last of the bad news. It turned out that Dbanj had lost some of his mojo as his hit making power had declined on the continent. He remained a household name but none of his work would hit outside his country Nigeria. A slew of his singles had lackluster performance and lo it became clear he had peaked. What the move to the US had achieved however was to make him a legend. Although still beloved and well known, he has become a live act but not a staple on radio or the clubs. Nasty C will be hoping to avoid such a career path.

Davido story bears a resemblance to that of Dbanj, after making hits like Aye and Skelewu the pop star dared to dream and sign to RCA. A logical step considering his fame, the superstar released some high-powered collaborations, first it was How Long with Tinashe and Pere with Young Thug and Rae Sremmud. The Dj Mastered produced track was crafted to appeal the hip-hop/R&b radio with its infections electro R&B beat. Despite the slick production and the fact that this formula has been successful both in the US in Africa, the single was just not it.  His American dream fumbled but more worryingly his popularity began to dwindle back home. For a moment none of his singles would hit as he fell into the Dbanj like pit.

His next career move was a reset. ‘If’, the infectious afro pop single was to be Davido’s next release after that questionable stint in America. This turned out to be a sound decision as the single broke records becoming his best known single. He followed it up with “Fall’ another smash hit that proved he had still was a star.  Lo and behold his afro pop roots were to be the magic wand as Fall broke him into the US billboard charts by entering the top 10 of the R&B charts. So, while his success on the African landscape is unquestionable the dust has not settled on his American quest.

Mr. Eazi of the Leg Over fame has utilized his worldwide notoriety by taking a milder stance at entering America. Instead of a full record deal he opted to signing a publishing deal with Universal music. This arrangement allows him to enjoy publishing royalties in the States without the obligations to the music label which might have tried to tweak his sound for marketing purposes. Since then he has appeared on the Late Late show with James Corden and has played at Coachella. Mr. Eazi still maintains his sound and still enjoys moderate success in the USA.

Tiwa savage has undertaken a similar journey by joining Universal music. She has some experience with America as a songwriter and background singer but as a star this is a new venture for her. The jury is still out on whether she will replicate her home success in America.

The journey has not been kind to kind to contemporary artists as it was for the likes of Hugh Masekela and Miriam Makeba who topped the hot 100 and cracked the top 10 respectively. Wizkid topped the charts alongside Drake on One Dance but his solo follow ups haven’t emulated the success. America is an enigma that African musicians have not been able to crack yet. Worldwide acts from Korea and Latin have been making their mark of late but for African artists the journey is still uphill.

Nasty C faces these odds as he dares to brave these muddy waters of the American market. His obvious adversary is the myriad of rappers that flood his genre of music meaning the competition will be very stiff for him. That challenge could also be his advantage as it speaks to the popularity of hip hop at the moment and as such his improved chances.

South Africa and Africa have been in love with Nasty C’s sound for over half decade since his catchy single Hell Naw, his career has been followed up by hits and the recent SMA has sent the world into a frenzy with its low tempo and raps reminiscent of EMINEM, but how will a trap obsessed America react to his style. South African hip hop may be slightly inspired by American genre but its appeal has always been uniquely African so Nasty may need switch it up a little bit.

His first release under Def Jam Recordings There, they go, has elements of trap and the Durban shot video serves to ground him a preserve his identity.

The young rapper will be hoping to use his charm to crack the market. Whether his slick raps, catchy hooks will make him sail through to be Africa’s first mega star in the USA is yet to be determined but whatever happens his new endeavor remains exciting his choices will be interesting to watch.

Also Def Jam recently siggned Boity and Nadia Nakai. We will give you another review on the two.