KOSHA revel in the glory of NAMA wins, reminisce on the making of Kure remix video #Earground

The recent 2020 edition of the National Arts Merits Awards (NAMA) ushered a rejuvenated outlook which excitedly has generated a buzz quite unlike previous installments.

NAMA is the most prestigious Zimbabwean creative and cultural awards and the team behind the biggest winner Ishan at KOSHA Management and Jungle Entertainment Ventures are celebrating outstanding achievement.

The executive producers of the video to the remix of megahit “Kure”, KOSHA and Jungle took time to reminisce on the creation of the revamped video for the monster hit.

Put together the ambitious project that brought together some of the country’s most exciting creative talents.

Earground caught up with the ecstatic Ashley Chabura, who is the General Manager at Jungle Entertainment Venture’s Southern African Division (Jungle South), says that idea to remix Kure’ came on the back of its unexpected success.

namely Spotify and Apple Music, which was unprecedented by our Zimbabwean catalog to date.”

“They then came up with the idea of a remix as a way of marketing to the rest of the world featuring the other Zimbabwean artists, whose music they distribute,” says Chabura.

Of the featured artists, Ti Gonzi is the only one not distributed by Jungle.

Chabura, who was involved at all stages of the video’s production, says that a lot of logistics went into the shoot which involved a lot of hands-on activities, real-time crisis management as well as the cast and crew overcoming various personal discomforts.

“I remember that even before the cameras rolled, we literally used public transport and did quite a bit of walking in Mbare to scout for the ideal locations,” Chabura reveals.

As is to be expected, when different personalities converge on a high-pressure project, tempers fray sooner rather than later. 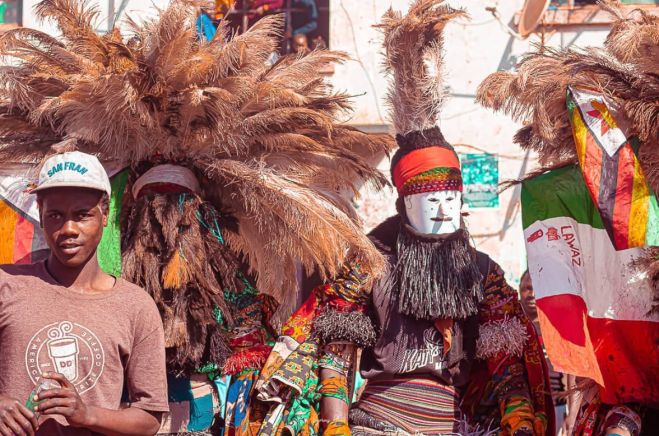 “There were clashes during the shoot, but at the end of the day people all came together because we were all fighting to make the video happen,” says Chabura.

Interestingly some of the most striking shots from the video came about quite randomly. Chabura says that the shots featuring legendary Zimbabwean boxer Alfonso “Mosquito”

Zvenyika training a young lady, came about purely by chance as on the way to the video the location they passed a gym.

Lo and behold the gym was run by none other than the famous pugilist and he was more than willing to feature in the video.

Ditto the barbershop, food outlets, and other neighborhood scenes. “The community in Mbare was so welcoming from vana gogo vepamusika (elderly ladies selling at the market) to the young boys and girls, everyone wanted to be a part of the video as they appreciated the role it played in uplifting the community,” Chabura says about local help during

Co-founder of Mbare based studio Chillspot Records, Dj Fantan, even got in on the act by volunteering free use of his vehicle for any necessary errands.

Chabura says the NAMA Nomination has demonstrated the passion for creating and exporting cultural products of KOSHA and Jungle.

“The nomination has made people realize that KOSHA and Jungle are not just in the marketing and distribution business but that they too are willing to extend their investment hand and get involved in the whole production process.

“A process that involves conceptualization, scouting for necessary strategic partners and even catering for meals during a video shoot,” he says.

“Jungle were the lead partners on this project as they were the first to invest in it, with KOSHA coming in as Project and Marketing Managers, and thereafter all these other people chipped in with resources and time,” Chabura says.