Tadiwanashe Brian Nyanga aka Klique / Que is German bound next week where he will be taking part in a two months creative residency project titled NgoMa Nehosho // Culture Clash.

Klique a member of Jibilika and a coordinator with the youth culture organization collaborated last year with German visual artist and disc jockey Maya Trampler at Mafuwe International Festival of Dance and will be going for a reciprocal exchange in Germany.

A dancer, choreographer, musician, fashion designer and visual artist the young artist looks determined to make a name for himself and raise the Zimbabwean flag high. 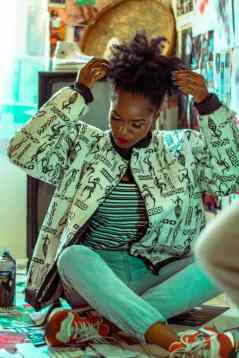 The exchange is going to examine origin and identity in Fashion. “We are comparing consumer behavior and the relationship to private ownership and the commercial.” said Klique

Musicians *, visual artists *, fashion designers *, poetry artists * will be around the team, meet Klique as guests over time and possibly become part of the overall artistic project.

In the past Klique has worked with several renowned Zimbabwean artists such as award-winning hip hop star Takura and Afro-Jazz maestro Willis Wataffi.

Supported by the City of Flensburg _ Cultural Office, Kuenda Productions and NORDER147*